Welcome to Wedding Sparklers Outlet’s blog. Check out the latest in all things related to sparklers for weddings and other special events. Add some sparkle to the season by browsing the latest topics in throwing fabulous events, and the pieces that come together to make them so. From sparklers for a wedding to decorative display buckets to more, Wedding Sparklers Outlet has something for you.

You and your close friends have been planning and hosting parties for more years than you can remember. But maybe one of the reasons you can't quite remember how many parties you have thrown or attended is because they just weren't that memorable. It doesn't really take much to take one of the many ho-hum parties and turn it into one your friends are likely to be talking about for years to come. Once your friends start showering each other with confetti cannons from the Wedding Sparklers Outlet, you have created a party no one is likely to forget. 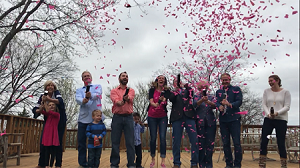 It really doesn't matter what kind of party you are putting together...graduation party, engagement party, baby shower...we have confetti cannons that are guaranteed to add a touch of fun and magic.

There is no better way to celebrate the pending birth of a child and announcing its gender than with a gender reveal party. But when all you do to announce your child's gender is say out loud, “It’s a boy,” or, “It’s a girl,” your guests might see it as a bit anticlimactic. We offer both pink and blue confetti cannons for you to add to your party. Imagine the smiles on your guests' faces when they pop their party confetti cannons and shower each other in pink or blue confetti! What a great way to let them all in on the secret.

Mom and Dad are getting ready to celebrate fifty years of marriage, and you have been put in charge of the party by your siblings. So, you ordered the catering service, rented the facility, made all of the arrangements including a cake, flowers, and a band for the dance portion. But, there is one thing missing — the finishing touch. At the Wedding Sparklers Outlet, we offer a gold metallic confetti cannon that might be just what you are looking for. A simple twist of the base fires off the cannon showering everyone with gold metallic confetti made from mylar and paper.

Rather than host another lame New Year's Eve party with New Year's hats and streamers for everyone to ring in the new year, why not add some real “pop” to the ball drop? If you are determined to create a party that everyone will be talking about for years to come, add party confetti cannons for every guest to set off at the stroke of midnight.

Our confetti cannons are perfect for both indoor and outdoor use. Be sure to visit the Wedding Sparklers Outletonline and order plenty of confetti cannons for your next party, no matter what the reason.