Posted by Wedding Sparklers Outlet on 10/3/2018 to Weddings

Spooky time is just around the corner and along with Halloween comes parties and lots of trick or treaters knocking on your door. But, Halloween is not just for kids; grownups can have fun, too. By adding confetti cannons to your special events, you can make them more amazing, more spectacular, more colorful, and more fun than ever! Take a look at these great ways to make use of orange and black party confetti. 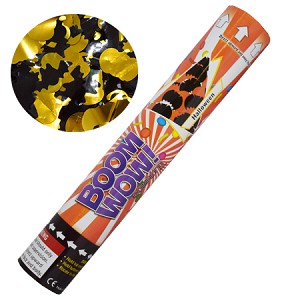 From L.A. to New York City, all the top clubs flood their Halloween party guests with showers of party confetti. Why not do the same at your big Halloween party by using multiple confetti cannons to shower your guests with a barrage of gold and black pumpkin/bat confetti while the DJ spins up your favorite dance tunes? Imagine their delight as pounds of confetti rain down on them. Finish the night off by showering the winners for best costume with a virtual wall of Halloween confetti.

Just for the Kids

Halloween means lots of cute, scary, glamorous, and spooky guests knocking at your door in search of candy and other treats. They come to your door, ring the bell, and then reach into the bucket for their goodies. This year, when they say, "Trick or Treat!" shower them with tons of party confetti from a confetti cannon! The bright gold and black confetti will surprise and delight them while at the same giving them a Halloween fright they won't soon forget.

What about the annual Halloween parade? Most schools have some type of parade at this time of year. All the kids get dressed up in their costumes and walk around the school or ride along the streets tossing candy out into the crowds. If your school has a parade like this, why not give the adults in the parade cannons that can shower the crowds with gold pumpkins and black bats? Our cannons can shoot their loads of bats and pumpkins up to 20 feet high, allowing you to shower the crowd as the parade rolls along.

At no time are these confetti cannons dangerous if used properly. They use compressed air instead of a pyrotechnic charge to fire the confetti out of the tube. They produce no heat or smoke, just a loud pop, followed by tons of confetti. The tubes are two inches in diameter by twelve inches long and are easy to operate. All you have to do is point the barrel away from everyone's face, twist the lower end while holding the upper end and "BOOM!" the Halloween party is on.