Welcome to Wedding Sparklers Outlet’s blog. Check out the latest in all things related to sparklers for weddings and other special events. Add some sparkle to the season by browsing the latest topics in throwing fabulous events, and the pieces that come together to make them so. From sparklers for a wedding to decorative display buckets to more, Wedding Sparklers Outlet has something for you.

3 Unique Ways to Use Confetti Cannons at Your Gender Reveal

When the time comes to announce your baby's gender, you could do it the old-fashioned way. You know, wait until your baby shower and verbally announce "It's a boy" or "It's a girl", but how passé is that? This is the 21st century — time to show your family and friends you know how to throw a seriously amazing gender-reveal party. One like they've never seen before, with gender-reveal-colored confetti cannons from Wedding Sparklers Outlet. Here are three unique ways you can plan a party confetti cannon experience to make the party something to remember.

Get Everyone Involved with Our Confetti Cannons 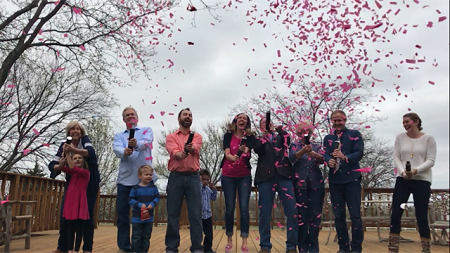 Why wait for your family and friends to get around to a baby shower when you can host your own gender reveal party? The trick is to keep everything, especially the cake, out of sight while your guests arrive. As they come through the door, be sure to give them one of our gender reveal confetti cannons. The only one who will know what color the confetti inside is, is you. Once everyone has arrived, gather them together and count down. "Five, four, three, two, one, REVEAL!," at which time everyone fires their party confetti cannon into the air filling your room with pink or blue confetti to the amazement of your guests!

If cleaning up a virtual snowfall of confetti all over your home doesn't sound like your cup of tea, why not move the party outside? Our entire selection of gender reveal confetti cannons is filled with biodegradable paper in shades of either blue or pink. For outside use, we recommend using the 18-inch party confetti cannon. These cannons can shoot their confetti loads up to 15 feet into the air. Gather everyone up, stand in front of them, start your countdown, and at one, fire your cannons. Image your guests’ surprise — not only at the gender of your baby, but at the amazing cloud of confetti floating in the air.

Weather permitting, invite your friends and family over for a casual barbecue and gender reveal party (just don't tell anyone that). Chances are pretty good the "Boy" and "Girl" teams are pretty even in numbers. Keep in mind you are just having a casual, friendly gathering to celebrate the coming baby. Add pink and blue decorations, just to add a little more fun to the event. After everyone has had their fill, give them each a piece of paper. The idea is for each to cast a vote for either boy or girl.

We offer a four-pack of gender reveal cannons, two pink, two blue, but only you know which is which. Either you and your spouse hold onto the 2 “correct” cannons yourself or give one guest you can trust, so you can see the reaction on your guests’ faces. Pop! Your guests are showered in the appropriate color of biodegradable confetti. Imagine the looks of surprise on their faces as the snowfall from our confetti cannons rains down upon them at the same time as they find out the gender of your baby!

To see our complete offering of confetti cannons, visit Wedding Sparklers Outlet. We carry both a 12-inch and an 18-inch party confetti cannon selection for gender reveal parties, weddings, and many other events. We sell in bulk to help keep our prices competitive: the more you buy, the more you save!